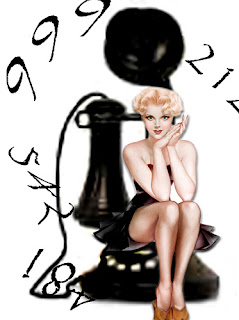 I hate the phone. For somebody who considers herself a communicator, who talks to the public all day long, who actually worked for New York Telephone for a year, I am surprisingly shy. When I come home, I don’t answer the phone. I’ve turned into my grandmother, who grew up without a phone, and always viewed the instrument with considerable suspicion. Convinced that someone had died or wanted to sell her something, she wouldn’t answer it, and this was in the day before voice-mail. Who knows what opportunities Granny missed?
We just got new phones for the house, as the Caller I.D. conked out on the old ones, like an Etch-a-Sketch that had lost its magnetization. Numbers were unrecognizable and when I missed a call from my son in Florida, I knew it was time to head to Wal*Mart. I do talk to my kids—quite happily and frequently—but for most of the rest of the world, I’m incommunicado. Shoot me an e-mail. Send me a letter. Knock on my door if you have to. Just don’t call me up and expect me to chat. I may get The Call and never know it, LOL. And don’t even ask about my cell phone, which is never charged.
I’m a changed woman from my high school and college days, when I’d talk for three or four hours at a stretch. About everything. About nothing. I still love my friends, but I’m giving them a Christmas card instead of a Christmas call. My kids complain that they always have to call me, and it’s true. As the perfect mom, I don’t intrude on their lives. When they’re bored or want something, they’ve got my number.*g*
I wonder if I’ve turned off the phone because I’m so steeped in the nineteenth century. Love letters played an important part in Mistress by Mistake. Now, a love letter—that I could live with.
Phone-phobic or chatterbox? Do you text? I don’t do that either. I will be calling my oldest daughter Sarah on December 13, her birthday!
If The Phone Doesn’t Ring, It’s Me. ~Song title by Jimmy Buffet