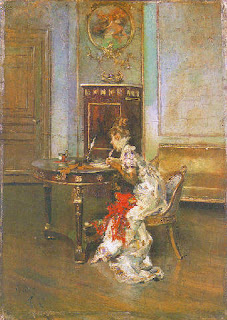 True confession. The writing—it’s not going so well. Well, that’s an exaggeration. It’s not going so fast. I’ve been in the middle of Edward and Caroline’s book for almost a month. I love them—it’s an ‘Opposites Attract’ story. Caroline is frisky and feisty and Edward is proud and prickly and there are sparks galore. They are the last book of a trilogy, and I’ve been analyzing why it seems so difficult to finish. Mistress by Midnight was done in 6 months, Mistress by Mistake in 4. Am I experiencing separation anxiety? I do have something to look forward to—I actually know what I’m going to write next and am relatively enthusiastic about it even though it’s all very amorphous.
I didn’t start Mistress by Marriage until the beginning of December, so it’s not like Edward and Caroline are withering on the vine, their edges curled, their skin fragile. They’re still plump and juicy. But I spend many of my waking hours wondering just how to get them to their HEA. So far I haven’t a clue.
So I’ve done something shocking. I took Stephen King’s On Writing out of the library. I love this book so much I might have to break down and buy it. Now, I’m the original bumble-around-in-the-dark girl. No helpful hints about craft for me, which explains why I didn’t know about GMC and POV for the first three years I wrote. The book, in King’s words, is ‘snapshots out of focus,’ vignettes of his development as a writer. I stopped reading King’s fiction somewhere during his alcohol and cocaine-fueled years—the books were becoming progressively darker for me and I do hate waking up in the middle of the night wondering if something is under the bed (besides my first three manuscripts). But he is a brilliant writer (my favorite is The Stand) and still married to his college sweetheart, which I love. He includes a poem his wife wrote in one of the chapters, and to me it was a truly romantic gesture. It is obvious he respects her words and her consistent support. Without her partnership, the first few pages of Carrie would have stayed crumpled up in the trash can.
I’ve been thinking a lot about support systems. Everyone who visits here (especially the Vixens) is part of mine. My husband is convinced without ever having read one word of my stuff that it’s absolutely great (poor sap). My heroine Caroline is a writer, and she’s blocked, too. I believe it’s time for Edward to overcome his prejudices and help her out. So by writing this blog, I may have uncrumpled a page or two. And major, major public thanks to Elyssa Papa, critiquer extraordinnaire, for reading the first 50,000 words and giving me so much insight into my own characters. I’m bringing her notes with me on vacation this week, where I shall sit by the pool with a drink or two and think about what she wrote. Become inspired. Or drunk. (But that won’t be Ely’s fault.)
How ‘crafty’ are you? Do you know what you’re writing/reading next?
Fill your paper with the breathings of your heart. ~William Wordsworth