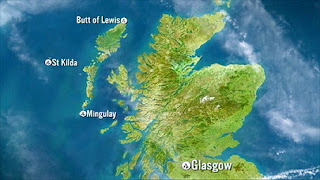 In the last book of the Courtesan Court trilogy, Mistress by Marriage, a character from Caroline’s past became so strong I had to send him away to Italy before he completely took over the book. Andrew Rossiter is the Master of Sin in the fourth Kensington book that, if approved, will follow the trilogy. I guess I could almost call the series the Courtesan Court Quartet, which would thrill my alliterative heart. I have 1/3 of this book finished, but need to write “The End” on something else first. I can tell Andrew’s getting impatient, but he and Gemma will have to wait until Sebastian and Freddie battle it out on the battlements of Goddard Castle. *g*
The main action in MOS takes place on a remote Scottish island, which has become a kind of character itself in the WIP. I’ve been to Scotland several times, but never to the Outer Hebrides. Bless you, YouTube. I’ve watched a clip of St. Kilda (which for some reason I cannot embed, but you can click on the link below), which is really Outer (with fabulous music that never fails to put me in the mood, so turn the sound up).
After spending quite a bit of time doing research, I’ve decided to create my own little universe, mostly based on Barra Head, which is now uninhabited except for “air so thickly crowded with birds as to produce the appearance of a heavy snowstorm.”~H.J. Elwes, 1868. What an image.
I have a little experience living on islands myself. First, there was Long Island in New York. Yeah, I know, not isolated, but pretty wild if you know the right hangouts. 😉 Early in my marriage, we lived at a boarding school on an island in Boston Harbor, accessible only by the school’s launch. Later on, we lived on Isleboro in Penobscot Bay, served by the Maine State Ferry System. But after 4:30, you were stuck on the island for the night. If you had that craving for a midnight chili cheeseburger, you had to make it yourself. It was really the prettiest place we’ve ever lived, and I hope to channel some of my island memories as I write MOS.
Are you an Island Girl? Do you have secondary characters who jump up and down at you? Are your settings characters in themselves?
http://www.youtube.com/watch?v=fNyrGFOkq_g