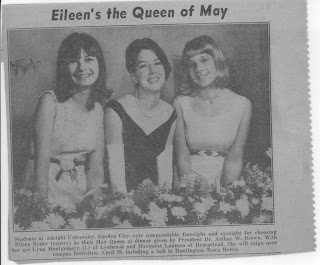 Danger, Will Robinson…I mean Maggie Robinson. Mistress by Mistake is now coming out in May 2010! Two months sooner than I expected, two months less to get myself prepped for publication. I’m excited, I’m nervous, I’m just a little crazy. But you knew that. 🙂 The Vixens are calling me their May Queen, and funny thing—when I went to college in the Dark Ages, I almost was the May Queen. You can see me in my May Day heyday as second runner-up. I still look just the same. Ha.
Now, I don’t want you to get the idea that I keep old newspaper clippings at hand to relive my skinnier glory days. As it happens, I was in my basement last week on a mad search for something and came across this amongst the various boxes that are labeled ‘miscellaneous.’ No word was ever truer. I found college term papers and WW II-era telegrams, baby pictures of unknown babies and mouse droppings. I never found what I was looking for, and now I think I need to spend even more time in the damp dank storage room and start pitching stuff. The task seems overwhelming. I teased one of my daughters that she can take care of it when I’m dead, which seems only fair, as half the stuff in those boxes comes from our late parents’ cellars to begin with.
So storage and archiving have been on my mind. But I really need to be writing, not walking down memory lane and sneezing over crushed cardboard boxes. Once again I’ll postpone the clean-up. My husband and I talked about how so much information is now scanned and saved to disks and pendrives, eliminating the possibility of mouse droppings. He told me I’d better flee the burning house with the pendrives that hold my manuscripts. Just in case, I’ve mailed every book to myself. My agent and editors have copies too. But basically, I am not organized and orderly. I stuff things in drawers for ‘later,’ and when ‘later’ comes, I wonder why I ever saved any of it. I need an assistant!
How do you keep track of important things? Save your work? Anybody want to come to my cellar for the summer?