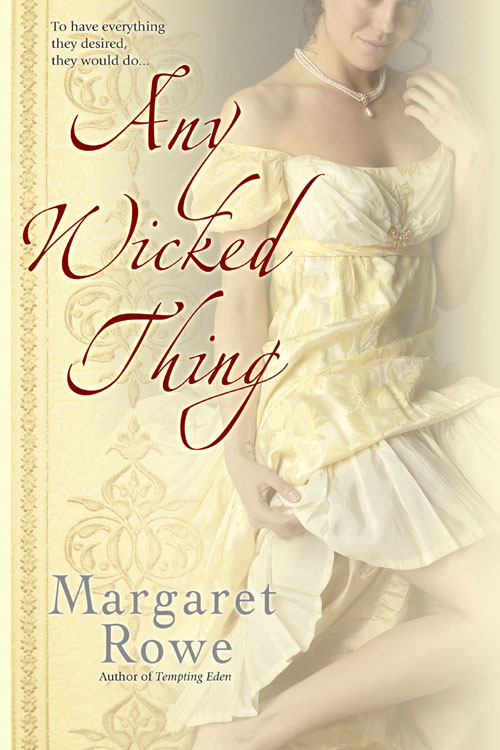 At twenty-one, Sebastian Goddard, heir to the duke of Roxbury, desperately sought diversion from a life smothered by peerage and position. His quest led him to one night of reckless passion, resulting in betrayal by his oldest friend Frederica Wells, and the discovery of his father’s darkest secret. Reeling from the devastation, he embarked on a ten-year debauch that well earned him the nickname—”Lord of Sin.”

Now Sebastian has returned to find his late father’s estate in ruins and Freddie more seductive than ever. He’s determined to drive her from Goddard Castle to pay her back for her deception and to protect his own dark secret. But Freddie makes him an offer he can’t resist…she’ll be his mistress for a month if he’ll consent to sell her the crumbling castle afterward.

Everything he could desire……

The Lord of Sin plans to shock and scandalize Freddie—to tease her every desire and leave her wanting. But his fiery-willed lover soon teaches him the past may not be what it seemed, the present more tempting than he could have imagined, and the future filled with more promise than he dared dream. For thirty-one nights is not nearly enough when you’ve been given a license to do any wicked thing…

Freddie stood up unsteadily and walked to a mullioned window. “I cannot live with you. After—after everything between us. You—you and your exploits are infamous. It would be most improper.”How hypocritical to hear her lecture him on morals when she had bared her breasts and more to him like a common harlot. “I’ve always found impropriety to be most delightful. Almost essential to my well-being.” He pictured Freddie sitting across from him at the breakfast table at Roxbury Park after a night of vigorous bed sport. Her lips would be swollen from kisses, her throat pink with love bites. Her wrists and ankles would be only slightly chafed from the restraints he’d place upon each white limb. His manhood twitched in anticipation beneath the linen napkin.She turned, her hair lit by the afternoon sunlight. “Let me buy the castle.”

“I have the money. Well, technically you have control of it, as you’ve just pointed out to me. But I must have enough. The castle cannot be worth much. It’s falling down daily.”

Sebastian sat back, crossing his arms over his chest. “Then why would you want it?”

She shrugged, causing her luscious bosom to thrust upward. “It’s been my home for almost twelve years. I’m used to it.”

He cleared his head. He’d always been a bit impulsive. Just twenty minutes ago he’d been dreading this meeting, and now he was contemplating making love to the one woman who was responsible for the second-worst time in his life.

Entreating, her voice was honey, with a dogged edge. He could be stubborn, too. “Why ever should I do that, Freddie? I’ve just said you can’t buy this wreck.”

She stared up at the coffered ceiling. “I’ll—I’ll be your mistress for a month. I’ll do any wicked thing you want if you let me buy the castle after. With everything in it, mind you. Your father’s manuscripts and artifacts. Just think, Sebastian. Thirty days and thirty nights.”

Sebastian felt the breath leave him, taking half his wits along. Was she a witch? A mind reader? He still had the napkin across his lap to cover his erection, so she couldn’t have noticed, could she? If she had an inkling that he’d settle for a week—hell, a night—with her, he’d lose his bargaining power.

Time with this version of Freddie would never be boring, especially if he had a month to train her to his tastes. He was sure he could bind her to him beyond silken ropes and blindfolds. After a month in his care, she would do anything he asked and be grateful. Beg him for more.

“The month of May has thirty-one days, Freddie. Tomorrow is May Day. I hope you’re much more amusing than you were last time. I’m seeing you now, a crown of flowers in your hair. The rest of you—” He lowered his voice. “The rest of you is quite unadorned. And I know just where the maypole is.”