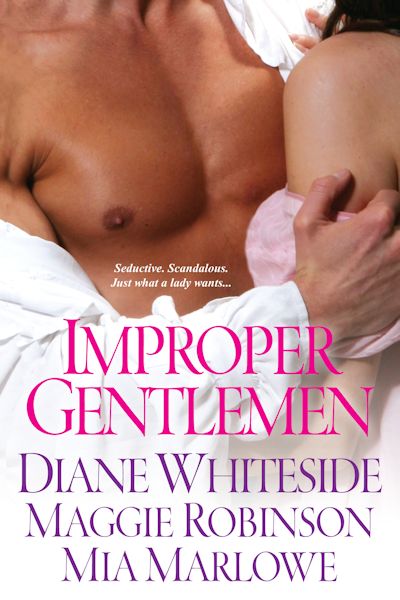 including To Match a Thief

Unsuitable. Forbidden. Oh-so-seductive. These gentlemen are hardly respectable. But they are the very best at being bad… What more could a lady want?

“To Match a Thief” by Maggie Robinson

Ex-pickpocket Sir Simon Keith can now afford the best of everything. But London’s most-desired courtesan is his lost love Lucy. Now Simon will need his wits and his considerably large…wiles to win his way back into her bed—and into her heart.

He rules Colorado’s most glittering gambling palace. Justin Talbot never does something for nothing. If daring Boston aristocrat Charlotte Morland needs his protection from a dangerous enemy, he’ll make her business his pleasure…

“A Knack for Trouble” by Mia Marlowe

Lord Aidan Stonemere didn’t go from prison to a title by playing by society’s rules. If he wants something, he takes it. Rosalinde Burke didn’t object to being taken. Once. To keep her from marrying a proper viscount, Aidan will do whatever it takes to remind her how deliciously good being improper feels…

Mindful of the sloshing water, it was not until she collided with the giant at her bedroom door that she realized her defenses had been breached. She shrieked and tossed the pitcher and its contents at her trespasser. The nerve of these dunning leeches to break into and enter her home for some trifling debt!Well, perhaps not trifling. Percy, and she by association, really were up the River Tick.“Lucy Dalhousie!”

For the longest minute she just stared at the giant, her brown eyes wide. She hadn’t heard her own name in six years, and had been perfectly content to let Percy change it—what her parents had been thinking of she had no idea. Dellamar was so much more musical, so refined. When she found her voice, she croaked, “Simon Grant?”

“Sir Simon Keith now. The name Grant was too hot back then, so I enlisted in the army under my mother’s maiden name. I—I thought you were dead. Your aunt said—well, it doesn’t matter! I canna believe my eyes!” He was grinning rather idiotically, the babbling bounder, even as he drew out an expensive handkerchief and mopped the water away from his incredibly broad chest. “What are you doing here?”

“Are you Miss Dellamar’s maid, then? I never pictured you in service, Luce. You were always such a fiery, spirited little thing.”

Little? Lucy now knew the true meaning of tongue tied. She believed hers was in a French knot. She unraveled the knot just slightly.

“You are Sir Simon? The Sir Simon Percy—I mean Lord Ferguson has sold his house to?”

“The very same! I’ve risen up in the world quite a bit, Lucy. I came to tell you five years ago, but that aunt of yours told me you’d passed away. Did you run off? No one could blame you—she was a wicked old bit—bat.”

“I—“Lucy looked around the door frame wildly. Tiny black spots floated in front of her eyes, quite distorting Simon’s handsome face. His bright blue eyes—the color of the sky she’d just observed a short while ago—his firm jaw, his white smile—he was grinning at her like a looby!—his broad shoulders clad in dark blue superfine—she slid to the floor in a faint. It seemed like the right thing to do while she gathered her far-flung wits about her.

He had come for her five years ago.

He was a knight.

He was looking to set up a mistress.

“Come now, lass! I know it’s a shock, running into me like this.” His laughter boomed. “And you did run into me, no mistake. I’m sorry I scared you, love. Wake up, now.”

Lucy was not going to wake up. She wondered how long she could lie on the floor with her head in Simon’s lap before he called for a doctor.