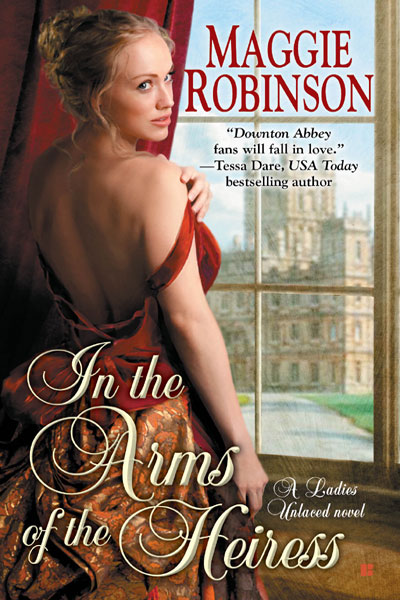 In the Arms of the Heiress

Nominated for best sensual historical romance of the year by RT Book Reviews!

It’s all fun and games until someone falls in love…

Independent heiress Louisa Stratton is going home to Rosemont for the holidays, and at the family’s request, she’s bringing her new husband—Maximillian Norwich, art connoisseur and artful lover, the man she’s written of so glowingly. There’s one hitch—he doesn’t exist. Louisa needs a fake husband, and fast, to make the proper impression.

Charles Cooper, captain of the Boer War and far from silver spoons or gilded cages, is so hard up that even this crazy scheme appeals to him. It’s only thirty days, not till death do them part. What’s so difficult about impersonating a husband, even if he doesn’t know a Rembrandt from a Rousseau?

The true difficulty is keeping his hands off Louisa once there’s nobody around to see their ruse. And then there’s the small problem of someone at Rosemont trying to kill him. Keeping his wits about him and protecting Louisa brings out the honor he thought he’d left on the battlefield. But when Louisa tries to protect him, Charles knows he’s found a way to face his future—in the arms of his heiress.

“Full of witty dialog and scorching romance, IN THE ARMS OF THE HEIRESS kept me reading non-stop.”
—RITA Award-nominated author Elizabeth Essex

“You are killing him?”

Her maid Kathleen had the most annoying habit of sneaking up behind her when she least expected it.

“It’s not as if he even exists,” Louisa Stratton replied, wiping up the splotch of ink.

Kathleen opened the terrace doors to the Mediterranean, and a chill damp breeze almost blew Louisa’s letter away. It was supposed to be warmer in the south of France. It was not.

“I don’t know yet. Avalanche? Train wreck?” Maximillian might be a mountaineer when he wasn’t in museums, clad in tight leather, his face burnished by the great outdoors. The tender lines around his cerulean blue eyes from squinting at the sun would fan like out like ecru lace. Louisa would trace them with a fingertip as he hovered over her—

Kathleen slammed the doors shut. “Both would have been all over the newspapers.”

“Damn it.” She should have thought of that.

“Indeed. You’ll have to find something less sensational. A heart murmur, perhaps. A septic finger.”

Louisa brightened. “Yes! He was picking late roses for me and caught a thorn. Such a tiny thing, yet so dangerous. You know how he spoiled me—fresh flowers every day, no matter the season. The man should have been wearing his gloves. His hands were so lovely. Long and smooth, with hardly any hair on his knuckles. He could do anything with them.” She gave Kathleen a naughty smile.

Kathleen tsked. “None of that talk. It still won’t work. After all, Maximillian Norwich is supposed to be an important man. You’ve made him so. You know your aunt always reads the obituaries and she’ll wonder why you didn’t put the notice in.”

“I was simply prostrate with grief. Half out of my mind. She thinks I’m mad anyway.”

Louisa usually had an answer for everything. If there had really been a Maximillian, she was sure she’d show all the proper feeling for losing the love of her life. She probably wouldn’t rise from her lonely bed for weeks, perhaps months. Years. She’d rival the late queen in her longing for Albert, only be far more attractively dressed.

There would be an alp of crumpled handkerchiefs and untouched dinner trays. Kathleen would call her a lost cause, and Louisa would simply turn her face to the wall in a melancholy fever. Watch the wallpaper pattern blur through unceasing tears. Listen to the siren call of the sea outside, which might tempt her to sew rocks into the hem of her nightgown and drown herself.

Of course, Kathleen would catch her at it before she pricked her fingers too bloody—Louisa had little experience sewing despite Aunt Grace’s attempts to turn her into a lady. Doctors would be consulted—perhaps Kathleen would even send all the way to Vienna for Dr. Freud.

“You’ll have to go to Rosemont in full mourning if you kill him. You know how black washes you out, if I may be so bold to remind you.”

“As if I could stop you.” Bold didn’t begin to describe Kathleen’s tongue. After five years of service, she was more friend than maid to Louisa. Over the past year of freedom they had shared several hair and skirt-raising adventures which had cemented their bond even further.

But lately, Kathleen had become very cranky. Louisa suspected the cause was some useless man. Before they’d run off to Europe, the new Scottish chauffeur Robertson had been making sheep’s eyes at Kathleen. True, he was a braw lad, but Kathleen should not give up her independence for a few minutes of clumsy coupling. Intercourse, in Louisa’s opinion, was much overrated.

“And your aunt would see to it that your social life be curtailed completely, just like she used to” Kathleen continued, in her usual role as the Voice of Reason. “A full two years of mourning. No visits. No concerts or lectures. I doubt she’d even let you go to London for the day to get a tooth pulled. You’d be bored to tears in no time. And wearing black to boot.”

“Too true.” Louisa nibbled at the end of her gold-plated Conklin Crescent Filler fountain pen, which was already cratered from previous unhappy letter-writing. What a bloody nuisance it was that she’d had to invent Maximillian in the first place. But Aunt Grace had been beyond horrified when Louisa left for a motor trip across the continent with only Kathleen for company, inundating the travelers with telegrams and letters at every poste restante, outlining in gruesome detail what might happen to two innocent young women alone in Evil Europe.

Well, Louisa was hardly innocent, as Grace well knew. But she was absent, and out of Grace’s reach. The letters had ceased abruptly once Louisa informed her family that she’d met the magnetic Maximillian Norwich beneath an especially dim and muddy Rembrandt in the Louvre, then married him after a whirlwind courtship.

But then the letters resumed with tepid congratulations. Louisa must come home and bring her husband.

Rosemont had not felt like home for some time, but after a blissful year of adventure and non-marriage, Louisa acknowledged it was probably time to return. Kathleen was sulking. Driving about in an open motor car all winter might give them both chilblains. There had also been some difficulty with Louisa’s bank lately which had to be straightened out. And according to letters from her wretched cousin Hugh and even Dr. Fentress, it was Aunt Grace who might be really dead soon, not that Louisa believed it.

Grace was much too spiteful to die. The woman had never even had a head cold the twenty-one years Louisa had lived with her after Louisa’s parents died. From the age of four, Louisa had been relentlessly upbraided by her guardian for every small infraction. Her inevitable big infraction had hellish consequences.

Well, perhaps the devil wanted Grace after all.

“What do you suggest, Kathleen? Should I tell the truth?”

Her maid raised one gingery eyebrow. “You? Tell the truth? I might faint.”

“You never faint. You are the only female I know who can keep her head in a crisis. Besides me, of course.”

If Kathleen disagreed with the compliment, she had the good sense to say nothing. When pressed, Louisa would have to acknowledge she had gotten into more than her fair share of scrapes the past few months. It would have been handy to have a husband or two to help her out of them, not that she had plans to ever marry. Why should she? She was an heiress, independent, unfettered. Louisa didn’t need a man to boss her around. She’d had enough rules at Rosemont growing up, spending over twenty years of her life like a nun walled in a convent.

Of course, Rosemont was far more luxurious than any convent Louisa had ever seen in her travels, with its thousand acre park flush with fauna, its fifty rooms glittering with gilt. For an untitled gentleman—just like Mr. Darcy!—Louisa’s father had been hideously rich, and he’d married well, too. Her American mother had a fortune even greater than his. Unfortunately both her parents had died in a boating accident when she was very young. If their portraits had not hung in the Long Gallery, she might have forgotten what they looked like.

“We have to go home sometime,” Kathleen said. “Don’t you ever miss Rosemont?”

No, she did not. Grace and Hugh were there, as well as a few other dependent relatives, and somehow Louisa could not seem to get rid of them. Grace had returned to her ancestral home to serve as guardian when Louisa’s parents died, and the others had just hunkered in. It was easier to run away when she came into her funds last year than butt heads with Aunt Grace and try to throw them all out of the house.

Louisa did not like to think she was a coward. She would go home, would confront them. Some of them, anyway. She had no objection to her mother’s cousin Isobel hovering in the hallways. They had come to England husband-hunting together in the late seventies, but only Louisa’s mother had been successful.

If one could call drowning after less than five years of marriage successful.

Louisa needed some success of her own. She would bribe Grace and Hugh with whatever inducements she needed to once her banking problems were solved.

She’d have someone at her side when she did it. A helpmeet. A handsome, sophisticated man of the world, who had swept her off her feet in the Louvre and who had been making sweet, sinful love to her with finesse and flourishes ever since with his long, smooth hands—at least in her fervid dreams. Maximillian Norwich would come to Rosemont with her, even if she had to bribe him, too.

Louisa tore up the letter to her aunt. “Kathleen, what is the name of that agency your brother used last year to get his new job? Evening Something?”

“Evensong, Miss Louisa. The Evensong Agency. On Mount Street. Works wonders, Mrs. Evensong does. That’s where Rosemont’s new chauffeur came from, too. Why do you ask? You’re not planning to fire me, are you?”

“Certainly not.” Louisa did not know what she’d do without Kathleen, even if she’d been a bit prune-faced lately.

“Well, that’s a great relief. Do you want me to bind your breasts for our jaunt this afternoon and brush off your trousers, or are you wearing your corset and carriage dress?”

“Trousers, I think. It’s damned cold out,” Louisa replied, reaching for another piece of hotel stationary.