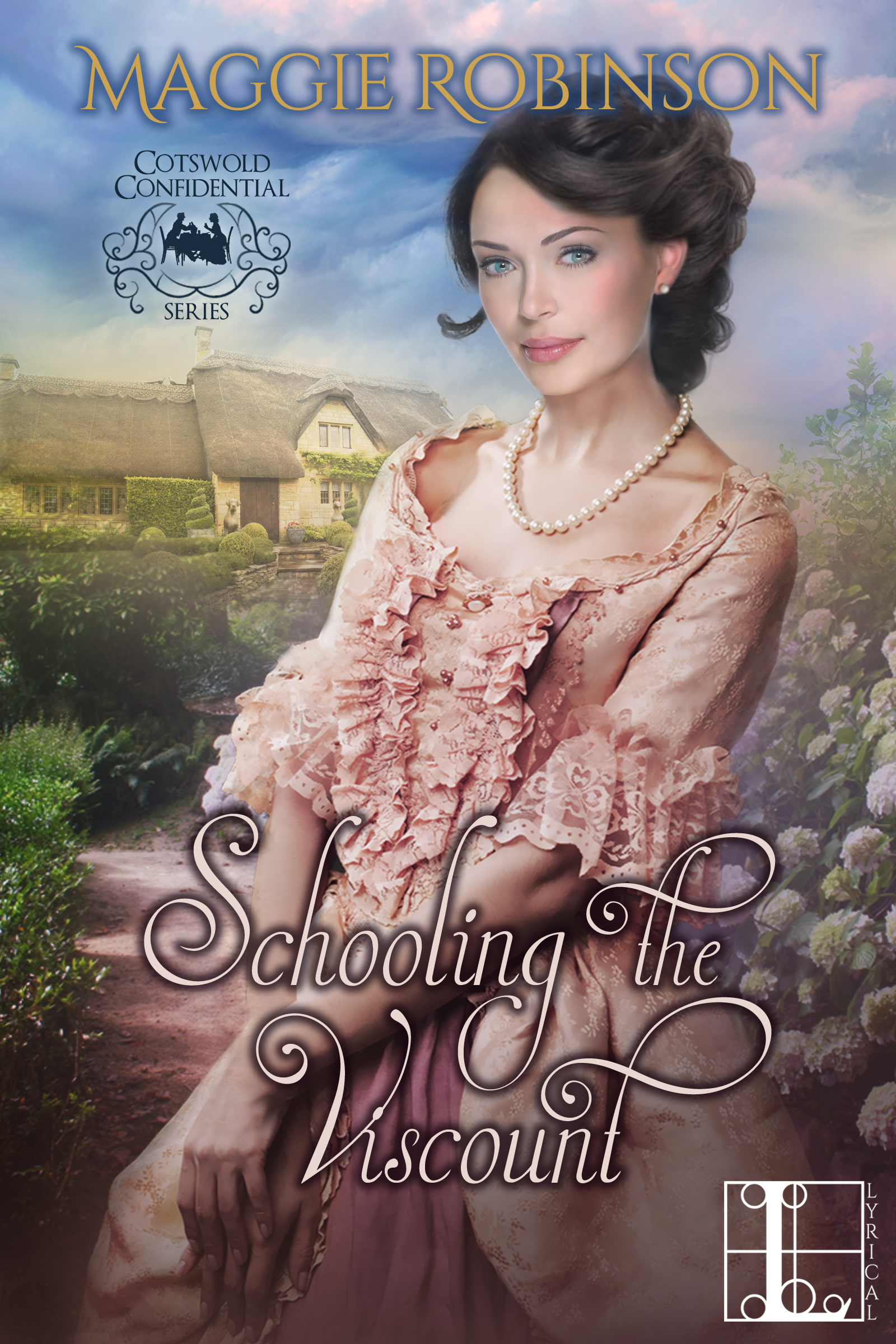 Captain Lord Henry Challoner is a young viscount who’s left his ambition on the plains of South Africa. Wounded in the First Boer War, he’s come home and wishes he were anywhere else, until his desperate father sends him to Puddling-on-the-Wold to rusticate and recalibrate. How can Henry have any fun without any alcohol, or worse yet, any women? Kept under house arrest under the watchful eye of his draconian housekeeper and earnest local vicar, he’s bored enough to begin speaking to sheep until he literally stumbles across schoolteacher Rachel Everett.

Rachel knows she’s not on Henry’s improvement plan, but can’t seem to avoid or repel him no matter what she does to keep him at arm’s length. Could it be that she quite enjoys being in his arms, even if it’s against all the Puddling Rehabilitation Rules? Can Rachel circumvent the town fathers and Henry escape his personal jailers and demons?

It was a cosmic joke. Exiled to a Cotswold village, the most candy-box, utterly banal sort of burg one could ever hope to find, with a name fit for a nursery rhyme. Rolling hills, sun-kissed stone, front gardens and window boxes bursting with the kind of vegetation which would have kept the maddest gardener up all night in delight.

There had been other exiles, he knew. Apparently this Puddling-place was some sort of a secret reformation spot. A health spa without the filthy-tasting mineral water. A Bath without Bath chairs and Roman ruins.

Despite his infirmities, he was plenty healthy, thank you very much. He’d spent his first week marching up and down the streets—all five of them—staring into the faces of passers-by, wondering who else was subject to his current indignity. Visiting each shop—all five of them. Peering into cottage windows that overlooked the cobbled road—you couldn’t help but look in. He saw polite, bland inhabitants, seemingly happy to be living in a place time forgot.

One hardly knew that this was the late nineteenth century, for God’s sake. Newspapers always were sold out when he came around to the combination Post Office and grocery on Market Street. There was not a modern invention to be found—no local train station, no telegraph towers. Or burlesque girls. He was completely cut off from the world as he knew it, except for his daily afternoon tea with the vicar.

Tea. Vicar. Two words usually not in his vocabulary.

All of the Puddling People looked innocent. Jolly and clean. Untouched by any kind of debauchery or depravity. Well, that’s what fresh air and an excess of sheep and sleep did for one, he supposed. Any kind of conversation with the local specimens had resulted in a boredom so profound he was tempted to stick a fork in his working eardrum.

He wasn’t going to let Puddling-on-the-Wold change him one iota. This petunia-scented imprisonment couldn’t last forever. The pater would eventually relent and allow him back to Town. All he had to do was steer clear of trouble and look sufficiently saved to the vicar. Born again. Slayer of his demons and ready to do battle as one of Britain’s young hopes.

Faugh. He’d tried that in South Africa, and where had that led? Ten short and brutal weeks of war, his disfigurement and a dependency on drink and the occasional opium pipe.

And women. Lovely, curvy, wanton women, none of them candidates to follow in his late mother’s footsteps as the next Marchioness of Harland, not that he wanted his pater the marquess to pop off any time soon, no matter how draconian his father had been sentencing him to live in this blasted story-book village.

Captain Lord Henry Challoner had some heart, after all.

Henry wasn’t really a captain any more, although the paperwork hadn’t quite caught up to him. He shouldn’t have been one in the first place. Hadn’t done much to deserve it. Men he’d commanded had died, and he himself had wound up interned with those who lived in a barn not fit for a flea-bitten jackass. There were no jackasses in the Veld as far as Henry knew, just himself.

He was on his required damned daily walk this bloody beautiful spring afternoon, equipped with a stout staff that wasn’t purely decorative. He’d been shot in the foot—thankfully, he hadn’t done it to himself or that really would have been the cosmic joke—and would probably limp for the rest of his life.

Henry supposed he was lucky he still had a foot; the Boer farmers who’d briefly held him prisoner after the ambush had not been surgically adept. Now, if he’d been about to calve—

The absurdity of his train of thought made him laugh out loud. He hadn’t laughed in a week, and the sound startled him. A bird trilled loudly enough for him to hear it from the clipped hedgerow, a temperate sun shone serenely overhead in the cloudless sky, and Henry wanted to raise his stick in revolt.

Puddling-in-the-Wold was just too perfect. Each stone cottage was snug, each little shop stocked with exactly what one would want, providing one had taken a temperance pledge. There were no alcoholic spirits on offer—Henry had inquired everywhere. His bribes and blandishments had been useless. The entire town was teetotal.

Even the Communion wine in the little Norman church appeared to be grape juice, and watered down at that. Moderation was all very well, but abstention? Henry shuddered.

Perhaps there were some berries in a bush he could ferment somehow. Wine was made with dandelion weeds, wasn’t it? Being a viscount, he knew nothing about cookery, but knew better than to ask Mrs. Grace, his housekeeper. She’d come with the cottage he’d been assigned, and was implacable in regards to his health and diet. It was as if he was back in the nursery again with Nanny, with wholesome soups and scrambled eggs and stewed fruit.

At five and twenty, he was too old to be treated like a child, no matter how childish he’d been. He’d been in his African garrison for years keeping the Zulus and the Boers at bay. Bad enough Chelmsford had invaded the Zulu territory without the authorization of the British government, resulting in the bloodiest battles imaginable, but then the idiots at Whitehall decided to annex the Transvaal Republic to stir up the Boers. Henry had done his duty on both fronts, and he wanted a roast, by God, and horseradish sauce. New potatoes larded with butter and parsley. Sponge cake filled with jam. Apricots in brandy. Something rich and delicious he could sink his teeth into, since he was no longer nibbling on any slender necks. In the week he’d been here, he’d not seen one woman in the village under fifty, and he’d looked.

But hold on. He heard children singing up ahead as he stumbled down the ever-narrowing lane that looked like it led to freedom from the Puddling Valley. Beyond was a perfect green hill and perfect white sheep, wide open spaces without a cottage in sight.

If there were children, there had to be mothers, right? Women of child-bearing age were youngish, and perhaps one of them was a lonely widow. Henry made an effort to trot a little faster, gritting his teeth at the grinding pain in his foot.

He hadn’t come this way before. He was, in fact, breaking a rule. There was a fixed itinerary for his walk, and he wasn’t on it. Take that, Puddling Prison Guards!

Rounding a corner, there was before him a gated stone wall, and beyond it a stone schoolhouse, with perhaps a dozen urchins dancing about in a circle in the grassy field. Henry’s own dancing days were finished, but he could appreciate the enthusiasm and joy before him, and he leaned on his stick to watch.

He was spotted immediately by a tow-headed girl of about six, who pointed and screamed. Even with his hearing loss, he was impressed with the infant’s lung power. He hadn’t had a reception like that since his father Arthur Challoner, the Marquess of Harland, discovered Lysette LaRue and Francie Jones in his bedroom at Harland House a week ago.

Henry should not have brought the girls home. He’d still be carousing in London, smoking and drinking and dining and trying to forget if he’d only kept his pants buttoned. Sneaking Lysette and Francie in had been the last straw, and the pater had had enough. Hero or not (and Henry really wasn’t), Something Had To Be Done.

Hence Puddling and rehabilitation. That same morning, Henry had been bundled up without his valet and incarcerated in the ancient Harland travel coach, his father blistering him verbally the many miles it took to reach this godforsaken place. Henry was almost grateful for the partial deafness in his right ear—he’d been a little too close to a jammed cannon, and when it unjammed—let’s just say the damn thing let him down.

He had been much better off with his Martini-Henry singleshot rifle, although in his opinion, the British army had been damn poorly outfitted all the way around. Much of the weaponry was obsolete, and it wasn’t very bright to pop up on the dusty plain in bright red uniforms. The filthy, khaki-covered farmers they fought against for a short but hideous two months had been expert marksmen, bruising riders and determined to maintain their independence by any means necessary.

So now Henry was half-deaf and half-lame. Delightful.

He knew there must be train service to this part of the world, but then his father would have been deprived of his limitless lecture. Upon arrival, the pater had met with the vicar in the Rifle and Roses—whoever heard of a pub that sold no ale? Or, for that matter, a vicar who did business in a pub?—while Henry was confined to the carriage, practically in handcuffs. His head had been too sore to object to his treatment, and he knew he deserved it on some level. Almost welcomed it.

He was a Disappointment, and he was tired of himself beyond belief.

It seemed he was some sort of Devil as well. The child shrieked as if he had horns. Henry ran a hand through his hatless blond hair to make sure none had sprouted up.

Someone stepped out the schoolhouse door at the commotion. A female someone, who was not over fifty. Henry felt his heart leap.

She was dark-haired and rosy-cheeked, built along sturdy country lines, ample of hip and bosom and the most luscious thing he’d seen since he’d arrived. Henry grinned.

The screaming continued. Did he have a spinach leaf from his nutritious but dull lunch stuck in his teeth?

“Now, Mary Ann, be quiet. It’s just one of our Guests,” the young woman murmured in a low, soothing voice. She knelt in front of the little girl as the rest of the students gave Henry the stink-eye.

“Good afternoon.” His voice was rusty, unused except when falsely complimenting Mrs. Grace on her culinary skills or inquiring everywhere about alcohol, although he’d given that up after the third day. Henry’s conversations with the vicar every afternoon were mostly one-sided, and the side wasn’t his.

The children stared back at him, silent. Had they been warned about him? As far as he knew, he’d never hurt a child. Hurt men, yes, but that was his job. He’d been in the army for six years, much to his father’s displeasure, and he’d killed a lot of people one way or another.

“I’m relatively harmless. You don’t have to be afraid.” Harmless Henry. There was a certain ring to it, even if it was untrue.

The young woman rose and took Mary Ann by the hand. “Say good afternoon, sweetheart. We must be polite to our Guests.”

What was this guest business? If Henry was being entertained in any way by the Puddling Populace, they were doing a piss-poor job of it.